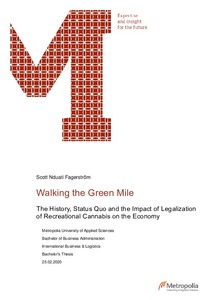 Fagerström, Scott Nduati
All rights reserved. This publication is copyrighted. You may download, display and print it for Your own personal use. Commercial use is prohibited.
Näytä kaikki kuvailutiedot
Julkaisun pysyvä osoite on
https://urn.fi/URN:NBN:fi:amk-202003294073

In 2018, there were 11 US states that have legalized recreational marijuana, as well as two nations. Cannabis legalization is a current and discussed topic globally today, since the old prohibition-based cannabis policies have not achieved the desired outcome in some of the nations where the policies have been implemented. This had led to the outcome, in which a few US states and a few nations have begun to question their cannabis policies and considering new solutions to better adapt their cannabis policies to better serve their nations/states’ economies.

Recreational cannabis remains illegal in Finland, even though consumption of cannabis has been increasing throughout the years, despite Finland’s prohibition-based policy approach in regards of cannabis. According to THL, nearly a quarter of the population of Finland has consumed cannabis at least once during their lifetime. However, less than 20 % of the population in Finland supports the legalization of recreational marijuana. Additionally, it is estimated that Finland would receive more than 20 million euros in TAX revenue if recreational cannabis was legalized. The illegal black market of cannabis in Finland is estimated to be worth between 16 – 74 million euros. Finland should take note of the success Canada and the US states have had after legalization of recreational marijuana, since the evidence does seem to support that the liberal cannabis policy seems to have more benefits than the conservative prohibition-based cannabis policy approach. However, other EU countries might have to legalize marijuana with successful results until Finland might consider such liberal policies seriously.