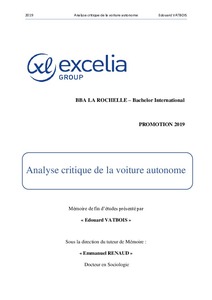 This research thesis discusses the reasons of the promoters and detractors of the
autonomous car. It analyses the arguments and strategies used, keeping the logic of innovationand progress as the guiding principle. This work explains how such innovation can be brought about, based on the assumption that a service economy leading to a redefinition of mobility is the most appropriate future for autonomous vehicles. We will also observe the evolution prospects of the actors in the sector. We will study the current development competition between GAFAM, automobile manufacturers and automotive equipment manufacturers and the resulting alliance games. Two very distinct strategies emerge from this, a vision of rupture as opposed to a progressive evolution. This study will highlight the central technological elements constituting autonomous vehicles, including artificial intelligence. These elements give rise to many challenges for the actors in the field, in terms of strategy, mobility and also ethics. In this way, the various factors that could affect this new industry will be defined and studied. This thesis will be based throughout on quantitative research, thus reinforcing these hypotheses. The autonomous vehicle is an industry with a promising future on different levels and at different scales. We will see that it can plausibly be a vehicle for technological, economic and social
progress. However, these remarks will be qualified by a series of studies conducted by critics of the autonomous car that question the coherence of innovation. We will then see that even if the autonomous car is criticized, promoters and detractors are interested in its development with the idea of making it more efficient and that one day it will be the driving force behind an entire industry.