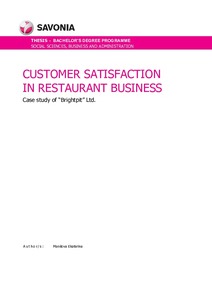 Manilova, Ekaterina
All rights reserved. This publication is copyrighted. You may download, display and print it for Your own personal use. Commercial use is prohibited.
Näytä kaikki kuvailutiedot
Julkaisun pysyvä osoite on
https://urn.fi/URN:NBN:fi:amk-202004124918

Customer satisfaction is one of the most significant aspects of any organization, especially in the restaurant business. Competition in the catering industry grows rapidly every year. Thus, the focus has moved towards customization. A customer’s opinions, needs and wants have become one of the fundamental values for every company. The thesis is based on the analysis of Brightpit Itd., as an organization which has two restaurants in operation located in Russia. Based on the reviewed literature, four approaches were found which form several methods for evaluating customer satisfaction such as CSI, Kano model, SERVQUAL and ISO standards. It was also discovered that customer satisfaction in the catering industry consists of several influential groups of attributes such as food, service and atmosphere. The results of the survey indicated that customer satisfaction among the client company's customers is moderate and it requires additional attention from the company's management. Special recommendations were suggested such as numerous events and actions in order to increase the level of customer satisfaction from moderate to high.