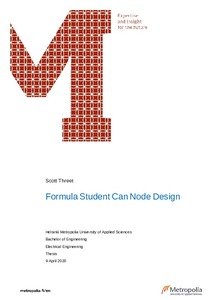 The purpose of this thesis work was development of two PCBs for Metropolia Motorsport. The first (Analog Node) reads analog sensors and sends their value on CANbus, and the second (Power Node) acts as programmable fuses and CANbus controlled switches, as well as having digital and Pulse Width Modulation (PWM) input and output capabilities.

The boards were designed using KiCad and using standard Metropolia Motorsports components. LTspice was used for circuit simulation, many calculations were done by hand, and STM32CubeIDE using the HAL libraries were used for the software development.

The result of both boards is successful, though both boards also have significant improvements that could be made in the future. For both nodes a desktop application for updating the configuration automatically could be created, or a CANbus bootloader could be implemented, but neither of those are a part of this thesis work.

There is some other software development still to do for the Analog Nodes, which will be done after the completion of this thesis. It is also possible the Analog Nodes will not perform with as high accurate resolution as initially targeted, which would involve a redesign of the board (probably using an external Analog to Digital Converter (ADC)) if higher accurate resolution than is available is required.

The improvements to the power node also would involve increased resolution, specifically of the current sense. This would probably involve a significant amount of time on software development, as it would involve a microcontroller with more pins to use as analog inputs, and the hardware would have to be significantly modified.

However, overall the PCBs are a success and will be implemented in Metropolia Motorsports newest car.