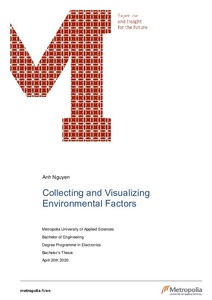 Nguyen, The Anh
All rights reserved. This publication is copyrighted. You may download, display and print it for Your own personal use. Commercial use is prohibited.
Näytä kaikki kuvailutiedot
Julkaisun pysyvä osoite on
https://urn.fi/URN:NBN:fi:amk-202004286374

Environmental factors contribute a great impact on many industries nowadays. Especially in agriculture and animal husbandry, the measures are extremely important as they help farmers control and improve the quality of their products. The main goal of this project was targeted in collecting and presenting data from surrounding environmental factors. From the provided data, users are able to monitor humidity, temperature, soil moisture and luminosity.

Measurements of humidity and temperature from sensor DHT11, as well as a light dependent resistor module, and a soil moisture signal amplifier were focused on in this project. Several communication standards were used, including serial connection, wireless communication and HTTP post request method. The microcontrollers used in this project were Raspberry pi 3 and Arduino Uno R3. Program for Arduino was written in C programming language, and Raspberry pi was programmed by using Python scripting language. Metropolia student virtual server was used as a host to where collected data are sent and stored. A single web page application was created for user to monitor data which is drawn by using Google chart. The idea of how to collect analogue data on Raspberry pi by using an Arduino was also presented on this project.

A small installation of internet of things concept was successfully created by this project. The sensors unit was capable to sense and demonstrate environmental factors measurements. The microcontrollers unit performed as expected and data were transferred effectively. The communication line worked as well as cloud storage operated unsurprisingly. With further development, this setup will be able to improve its quality, in addition to its performance.