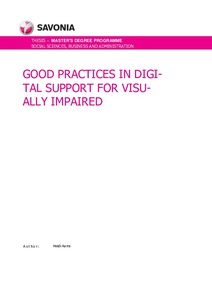 Aarra, Heidi
All rights reserved. This publication is copyrighted. You may download, display and print it for Your own personal use. Commercial use is prohibited.
Näytä kaikki kuvailutiedot
Julkaisun pysyvä osoite on
http://urn.fi/URN:NBN:fi:amk-202004296577

There is established digital divide existing and possibly growing which leaves more people in danger of being excluded from rapidly advancing technology and digitalization. Government priorities including the digitalization of public services and accessibility have been written into law by EU Directive. Simultaneously, pilot-projects to increase citizen´s digital skills and develop operating model for digital support have been launched.

Qualitative research methods of case-study and survey were used where participants were asked about their opinions about digitalization and increasing electronic services and their experiences accessing digital health services and using digital support. The quality and needs for digital support provided by The Association were also valuated.

The study showed that barriers do exist for the visually impaired, but difficulties can vary considerably. Elderly people face more challenges with devices and their use due to inexperience with technology and effects of aging in general while young people have more often difficulties in interacting with authorities and managing procedures. The current strong identification system and lack of training platforms hinder the independent use of services. Digital support is needed and valued but availability is unequal. Design of services should start with the needs of end-user with greatest challenges considered first, to create an accessible service network that accommodates most users and requires special service only as last resort. If digital skills are considered requirements for functioning in civil society today and in the future, learning them should be made possible for everyone.

The study concludes that the current operating model of digital support in the Association for the Visually Impaired in North Ostrobothnia already includes good practices, whilst being in some respect centralized. Adequate resources, aging of the visually impaired and challenges in recruiting volunteers as well as promoting awareness of the services are all challenges that must be addressed. Practices that increase the availability and accessibility of services and digital support and sharing of information between all the stakeholders to increase inclusion of visually impaired should be developed at all levels. The generally used chosen regional concept should utilize methods of service design and co-creation.

Further research should be done of topics like the cost-effectiveness of accessible design of digital services, the effects of different funding structures of the Federation and Association of the Visually Impaired and the attitudes and knowledge of healthcare professionals towards visually impaired. A business model could be created to develop and promote accessibility expertise of visually impaired.