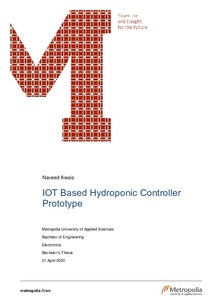 Awais, Naveed
All rights reserved. This publication is copyrighted. You may download, display and print it for Your own personal use. Commercial use is prohibited.
Näytä kaikki kuvailutiedot
Julkaisun pysyvä osoite on
http://urn.fi/URN:NBN:fi:amk-202004296495

The goal of this project was to develop a hydroponic controller prototype which can control the environment of a hydroponic system by using open source micro controllers. The controller will monitor the environmental elements that affect the growth of plants in system like pH, electrical conductivity, humidity and temperature by using respective sensors. The user can set desired threshold values. The system maintains the saved parameters and uploads the data to the data base.

An Arduino 2560 board was used to develop the device along with particle photon board to upload the data to mongoDB database. The device uses two analog sensors, one to measure pH of water and one for electrical conductivity and a DHT11 sensor to measure humidity and temperature.

The controller unit is designed in a way that it is easy to repair and easy to copy so that similar units could be developed without difficulty. User interface usability study was done and applied during writing the software for device to make it easy to use and avoid possible accidents by user. The safety of device operation was taken in account during designing its workflow to keep electronics in device and the equipment being controlled safe. The system architecture was designed flexible which allows interfaces that integrates with both current and future components. A description of how such system can be build is given. The workflow of system hardware and software is presented. This study can be used to develop similar systems.

The result of study is that, the performance of prototype was tested, and results were obtained through the data cloud. The device performed as expected and according to requirement of system. The standard of hardware of device was lower than the commercial standard. The device operation can be further improved by using industrial grade sensors in future.