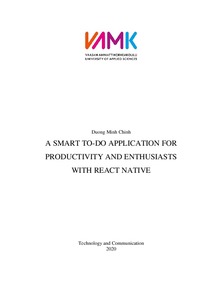 Duong, Chinh
All rights reserved. This publication is copyrighted. You may download, display and print it for Your own personal use. Commercial use is prohibited.
Näytä kaikki kuvailutiedot
Julkaisun pysyvä osoite on
http://urn.fi/URN:NBN:fi:amk-202004306635

The thesis was done based on the urge of creating an innovative to-do mobile application with the goal of helping people to reach their best productivity performance. There are several major to-do mobile applications serving different kinds of planning tasks in the market, but none of them simplifies the methods (the way of planning) or helps users stay motivated enough. Quint, the name of the mobile application that this thesis worked on, defines all the matters and unifies useful features from each major application, as well as provides new ones in order to help users stay “hydrated”.
Quint is a cross-platform mobile application. To be more concise, Quint includes two main parts to form a completely useable application. We separate them as Front-end and Back-end parts. The Front-end part was mainly built with React Native and Expo. The Back-end part was built with Nodejs (Express) and Fire-base. This thesis focuses on the implementations of Quint in both Front-end and Back-end sides at the time Quint reached its beta testing phase.
Quint has reached it first milestone, which is to be released for beta testing in iOS (TestFlight). At the time writing the thesis, Quint has already received over 50 feedbacks from public testers with 100+ download times despite the shortness and the lack of advertisements.