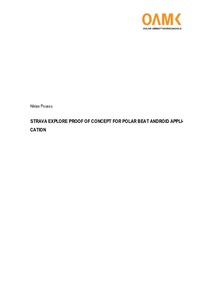 Poussu, Niklas
All rights reserved. This publication is copyrighted. You may download, display and print it for Your own personal use. Commercial use is prohibited.
Näytä kaikki kuvailutiedot
Julkaisun pysyvä osoite on
http://urn.fi/URN:NBN:fi:amk-202004306717

The subject of this bachelor’s thesis was to create a proof of concept feature to visualize nearby Strava Live Segments in a Google Map within the Polar Electro’s Beat Android application. Polar Electro Ltd. is a Finnish company that designs and manufactures sports training computers and various other heart rate measurement devices.

The proof of concept feature was implemented as an extension to the Polar Beat Android applications’ exercise feature where the user can track various exercise related metrics in real-time, such as the user’s heart rate, current speed and elapsed time.

Polar Beat is a multisport fitness Android application developed by Polar Electro Ltd that is designed to be used for athletes to train with a live heart rate and to track their training sessions. Polar Beat gives the athlete training analysis and progress reports.

Strava Live Segments is a feature developed by Strava for cyclists and runners to compete on a time-trial with on user-defined stretches of road or terrain, which Strava calls Live Segments. Strava Live Segments encourages competitive and casual athletes alike to beat their records and reach a higher level of fitness.

The implementation consisted of building a new feature capable of fetching data for Strava Live Segments from the Strava REST API and transforming the data in order to visualize nearby Strava Live Segments in a Google Map. The new feature was built using the MVVM software architectural pattern and the Retrofit HTTP client was setup to enable HTTP communications and authentication to the Strava API.

The result was a proof of concept feature capable of visualizing nearby Strava Live Segments in a Google Map and showing details about a segment by selecting a segment in the Google Map.