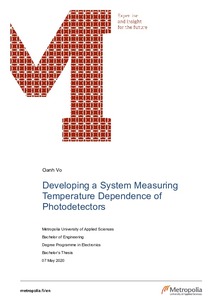 Vo, Oanh
All rights reserved. This publication is copyrighted. You may download, display and print it for Your own personal use. Commercial use is prohibited.
Näytä kaikki kuvailutiedot
Julkaisun pysyvä osoite on
http://urn.fi/URN:NBN:fi:amk-202005077748

This thesis work was commissioned by Emberion Oy. A measurement system for investi-gating the temperature dependence of Emberion photodetectors was needed. The goal was to develop a system consisting of instruments, measurement PCBs, and software, which enables measurement automation. Upon having a complete system, temperature meas-urements shall be conducted, followed by an analysis of measurement results.

A complete measurement system was successfully designed and implemented: tempera-ture measurement daughterboard PCB was designed using PADS VX.2.4, data acquisitions and measurement automation were fully achieved by LabVIEW, and GNU Octave 5.2.0 was employed to perform data analysis. Emberion photodetectors were measured and the relationship between temperature and their performance was analysed. It was concluded that the generated photovoltage, hence the responsivity of a photodetector becomes better when its temperature decreases. Furthermore, an offset dark voltage within the photode-tector, which is proportional to the temperature, was observed in the absence of light, and it has a direct effect on photosensitivity.

Understanding the temperature dependency of photodetectors provides insights for design considerations of high-performance photodetectors. Cooling was suggested as an efficient method to overcome the temperature limitation. It, however, exhibits other design challeng-es as it requires more costs, space, and power.