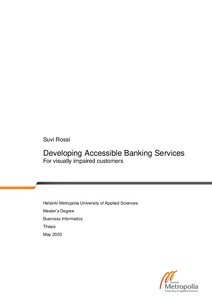 Rossi, Suvi
All rights reserved. This publication is copyrighted. You may download, display and print it for Your own personal use. Commercial use is prohibited.
Näytä kaikki kuvailutiedot
Julkaisun pysyvä osoite on
http://urn.fi/URN:NBN:fi:amk-202005087874

The objective of the Thesis was to analyse and propose changes needed for developing an accessible online banking. The case company is one of the biggest Nordic banks. At the moment, the case company can – to some extent – serve the visually impaired for online banking (via the use of screen reader etc), but these services need improvement. According to Finnish Federation of the Visually Impaired FFVI 2020), in Finland there are currently 50-60 000 of the population who is considered as visually impaired. Fully blind are less than 10 000 people in Finland.

Second, the analysis of customer needs was done for the visually impaired customers in online banking of the case company, guided by the conceptual framework developed in the previous step. The current state analysis used interviews as well as accessibility test where the current beta version of online bank was used. The Accessibility test was done based on the standards provided by World Wide Web Consortium 2018 (W3C) international web standards. The current state analysis revealed the needs for improvements in accounts, payments and contacting the bank.

The outcome of this study is a development plan for accessible online banking for the case company. The proposal is built based on the results from the current state analysis and the retrofitting model for developing accessibility and usability for visually impaired customers. The outcome of the thesis was validated in the case company and became part of the ongoing project to develop online banking for the visually impaired. The Thesis proposed what can and need to be improved before publishing the online banking to wider markets.