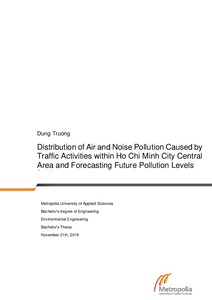 Truong, Dung
All rights reserved. This publication is copyrighted. You may download, display and print it for Your own personal use. Commercial use is prohibited.
Näytä kaikki kuvailutiedot
Julkaisun pysyvä osoite on
http://urn.fi/URN:NBN:fi:amk-202005108150

Consciousness of air pollution has increasingly garnered attention from people over the world; it has been recognized as targets of health, energy and cities, which are known as SDG3, SDG7 and SDG11 in the World Sustainable Development Goals (SDGs) by WHO since 2015. In Ho Chi Minh city (HCMC), Vietnam, citizens are suffering from the effects and consequences of health that are caused by air pollution. This situation has progressively become serious.
The cause of pollution is believed to be the rapid growth in population within HCMC, causing expansion in the number of traffic vehicles, industrial facilities and construction sites. However, the slowness in urbanization to meet the increasing demand of the city, is also an indirect cause of air pollution.
This thesis concentrates on observing and analyzing air monitoring data in HCMC, with respect to the following indicators of pollution types: total suspended particles (TSP), carbon monoxide (CO), nitrogen dioxide (NO2) and noise pollution, measured at 9 monitoring stations from 2007 to 2017 within HCMC central area. The goal of this thesis was to illustrate air pollution in HCMC and also to indicate that environmental protection should consider humans.