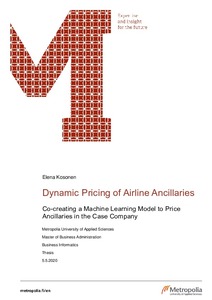 Kosonen, Elena
All rights reserved. This publication is copyrighted. You may download, display and print it for Your own personal use. Commercial use is prohibited.
Näytä kaikki kuvailutiedot
Julkaisun pysyvä osoite on
http://urn.fi/URN:NBN:fi:amk-202005128486

The purpose of this study was to improve the case company’s ancillary pricing by developing a machine learning model to price ancillary products. The case company is a medium sized network airline that operates over 100 routes from its hub. Ancillaries are considered an essential part of the company’s future and are integrated into the company’s strategy. There are ambitious targets for growing ancillary revenue during the upcoming years which requires new innovative ways to develop ancillary business.
The main limitation in the existing pricing of ancillary services was that the pricing decisions were based on educated guesses and business experience, rather than effective utilisation of collected data. This led to relatively static prices that often did not reflect customers’ willingness to pay, hence resulting in missed revenue opportunities. The focus of this thesis was on improving the pricing of ancillary services and specifically studying how machine learning can be harnessed to better target the customers with the right price.

To better understand the business problem and to be able to analyse the current state of the ancillary pricing process, interviews with the case company employees were conducted. Additionally, ancillary pricing documentation was reviewed. Existing knowledge was used to gain a better understanding of ancillaries in the airline industry and ancillary pricing, as well as how machine learning can be utilised in pricing. Existing knowledge was used to build a conceptual framework that supported the co-creation process of the machine learning model that made the outcome of this study. Co-creation process was iterative and included several steps of collecting data. Data for building and training the model was collected through price experiments. The purpose of the experiments was to gather data about customers’ willingness to pay. Data collection was done through controlled experiments, i.e. systematically varying prices and analysing customers’ response.

The co-created proposal, a machine learning model for pricing ancillaries, was presented to the case company’s representatives to collect feedback. The implementation of the final proposal was planned to be done in three stages between Q1 and Q3 2020. The first implementation happened as planned during Q1 but due to the outbreak of COVID-19 pandemic early 2020, implementation was put on hold. Due to this, the validation of the model through collecting data on its performance is not included in this thesis.