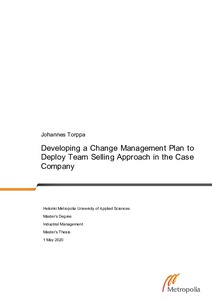 Torppa, Johannes
All rights reserved. This publication is copyrighted. You may download, display and print it for Your own personal use. Commercial use is prohibited.
Näytä kaikki kuvailutiedot
Julkaisun pysyvä osoite on
http://urn.fi/URN:NBN:fi:amk-202005128606

This thesis focused on developing a change management plan for deploying team selling approach. Team selling is a customer management tool that uses the competence of different departments to create added value in the form of know-how to the customer. In the past it was decided to start the using of the team selling approach but years after the deployment, experience indicated that it was only partially in use. Since team selling involves many employees from the case company and it is a new way of working, it was realized that change management was needed.

The research approach used in the study was design research and it was conducted in four main steps: finding good practices from the literature, current state analysis, developing initial proposal and validating the initial proposal. Data was gathered from interviews, internal documents and workshops.