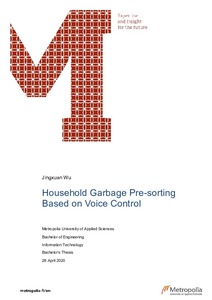 Wu, Jingxuan
All rights reserved. This publication is copyrighted. You may download, display and print it for Your own personal use. Commercial use is prohibited.
Näytä kaikki kuvailutiedot
Julkaisun pysyvä osoite on
http://urn.fi/URN:NBN:fi:amk-2020051611786

Due to lack of knowledge of garbage classification, at least 33% of garbage is not well disposed of in an environmentally friendly manner. In order to make garbage sorting easier, the goal of this project was to investigate the status of garbage sorting, and design and create a garbage pre-sorting household product based on voice control. When people say the name of the item they want to throw away, the system would detect their speech and open the corresponding garbage bin.

In this project, an Arduino UNO was combined with a WEGASUN-M6 voice recognition module based on the Arduino programming platform. Some boxes and servo motors were used to simulate the garbage bins to enhance the sense of experience.

The voice recognition system has been successfully implemented with general garbage sorting mechanism. First, typical household wastes were divided into four categories based on their different disposal and utilization methods. The waste categories were input into the created system as a library. The system could recognize 150 different wastes which covers the majority of household garbage. The system succeeded in real-time pre-sorting voice control within a fixed distance. When receiving detected voice input, the cover of the garbage bins opens automatically. The recognition system is compatible with both English and Chinese (Mandarin).