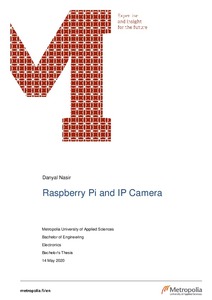 Nasir, Danyal
All rights reserved. This publication is copyrighted. You may download, display and print it for Your own personal use. Commercial use is prohibited.
Näytä kaikki kuvailutiedot
Julkaisun pysyvä osoite on
https://urn.fi/URN:NBN:fi:amk-2020052513432

The main objective of this project was to create a program for Raspberry Pi that shows live video feed on a display as a form of surveillance using an IP (Internet Protocol) camera. The goal was to try to create a simple program using the portable Raspberry Pi and establish a connection with an IP camera over the local network and be able to acquire live video stream and deduce how secure it is.
This project consists of a Raspberry Pi 3B+ model as the main central processing device. The other main device involved in this project is a TP-Link NC450 IP camera which will be used to record the live video streaming sessions. Any screen which supports VGA or HDMI can be used for the display. The Pi model is powered by a Broadcom BCM2837B0 quad core A53 processor which is 64 bit. It consists of GB Ethernet port and a wifi chip for connecting to a network. The TP-Link NC450 camera is a wireless HD PTZ camera with a 75 degrees lens view. The camera device has an Ethernet port for wired connection and built in wifi for wireless network connectivity. The camera uses H.264 AVC video codec standard.
The main connection established between the camera and Pi is done mainly by RTSP. The camera has its own RTSP stream link which allows it to connect to RTSP servers online. An important software library, FFmpeg, is installed in the terminal of the Pi. This package acts as a H.264 video encoder/decoder and compresses the AVC format from the TP-Link NC450. The encoded format can then be used in a RTSP stream in a python script being run in the Pi. The script runs the stream and is able to display the live video feed.
The project resulted in a successful display of live video stream using RTSP. The stream was able to run up till native 30 fps as that is the maximum supported frame rate by the camera. There was video latency of less than a second in the display. The overall project can be employed as a means of private indoor surveillance system. Using the Pi as a headless system, the video stream can be viewed remotely.