Study on the Link Sensitivity of ZigBee 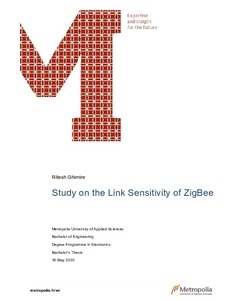 Ghimire, Ritesh
All rights reserved. This publication is copyrighted. You may download, display and print it for Your own personal use. Commercial use is prohibited.
Näytä kaikki kuvailutiedot
Julkaisun pysyvä osoite on
https://urn.fi/URN:NBN:fi:amk-2020052613661

Internet of Things (IoT) is one of the common computing concepts used these days. It is everything that connects to the internet i.e. objects like cars, light bulbs, doors, etc. are connected to the internet via an embedded device such as a microcontroller. Wireless Sen-sor networks based on standards like ZigBee are popular as they require less power for operation and the cost of installation of the network is low.

This project was done to study the effect of different operating environments in which the network is installed and the signal strength of the antenna in both coordinator and the end device of the network using a DIGI XBEE3 ZIGBEE MESH KIT. The XBee modules were configured using the XCTU application as a coordinator, router, and end device. The tests were conducted in an indoor and outdoor environment using the radio range test tool in the XCTU application to study the signal strength of the receiver for both the Coordinator and end device.

The signal strength of ZigBee devices is affected by the environment in which they operate. So, to avoid the data loss the network should be free of obstacles and have a clear LOS. The selection and positioning of an antenna are an important factor in setting up the wire-less network. A physical survey of the site where the network is to be installed can be done to visualize the wireless network coverage, figure out possible obstacles and interferences. The signal strength of the receiver from Range tests can be compared with theoretical cal-culations of the signal strength. Mesh networks can be done to prevent data loss and weakening of the signal as there will be multiple routes for the signal to travel.