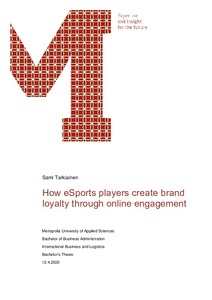 Tarkiainen, Sami
All rights reserved. This publication is copyrighted. You may download, display and print it for Your own personal use. Commercial use is prohibited.
Näytä kaikki kuvailutiedot
Julkaisun pysyvä osoite on
http://urn.fi/URN:NBN:fi:amk-2020052814765

Who would have known back in the late ‘50s, when the first video game was invented and video gaming phenomenon started, that in the 21st century it would be a major phenomenon, where hundreds of millions of players from all around the world are trying to win gaming tournaments and to get fame for itself. This phenomenon is called eSports.

The main reason for this thesis is to get an idea of how eSports players create and could create brand loyalty for themselves through social media. This subject has never been studied before and since the gaming industry is growing every year, it is worth analyzing this phenomenon.

The behavior of the fans in the online community is divided into different segments. The behavior of the streamers seems like having a major role in getting either positive or negative feedback from the fans. By owning more positive effects the players more likely to get more followers and fans, which in turn increases the player’s brand.