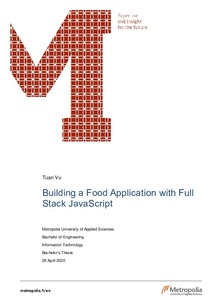 Vu, Tuan
All rights reserved. This publication is copyrighted. You may download, display and print it for Your own personal use. Commercial use is prohibited.
Näytä kaikki kuvailutiedot
Julkaisun pysyvä osoite on
http://urn.fi/URN:NBN:fi:amk-2020052814853

The main goal of the final year project was to develop a full-stack food application based on JavaScript. The idea of using only one programming language on both the client and the server has many advantages. It helps software developers to reuse components and resources.

The application was built using React in the front-end development and Firebase, Node.js and Express in the back-end development. Node.js is the most popular JavaScript runtime environment at the moment and has no competitors that have as much as 10% of Node.js’s community. Firebase was used as a database for the application and Express was used to build the server. On the front-end, React.js was used along with Redux for state management.

The project can be perceived as a success because through this project, the web development team achieved all the initial objectives, which included developing a working application for food lovers and trying to meet specific technical and performance goals.