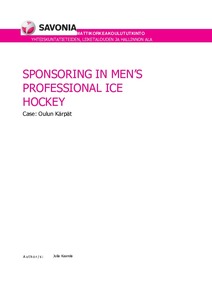 Kaarela, Julia
All rights reserved. This publication is copyrighted. You may download, display and print it for Your own personal use. Commercial use is prohibited.
Näytä kaikki kuvailutiedot
Julkaisun pysyvä osoite on
https://urn.fi/URN:NBN:fi:amk-2020060216139

The research indicated the main problems in sponsorships in men’s ice hockey are the large number of sponsors which has a negative affect on the overall image of Finnish League and the rules set by Finnish League concerning sponsoring. Lowering the number of sponsors and having main sponsors who are sharing most of the financial responsibilities was found as a solution. This would bring Finnish League its much needed change and get the Finnish League back to being one of the top ice hockey leagues in Europe. By improving communication and creating specific sponsorship packages to offer the sponsors can help to develop already existing relationships between the sponsored party and the sponsor.

By having a larger number of interviews with sponsor organizations and sponsored parties more generalizations can be made. Comparing sponsorships in the Finnish League to the National Hockey League new development possibilities can be found. An interesting view point for further research would be from sponsor organizations.