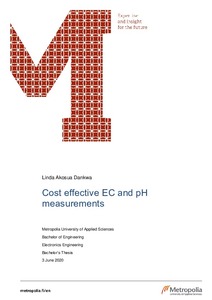 Dankwa, Linda Akosua
All rights reserved. This publication is copyrighted. You may download, display and print it for Your own personal use. Commercial use is prohibited.
Näytä kaikki kuvailutiedot
Julkaisun pysyvä osoite on
http://urn.fi/URN:NBN:fi:amk-2020060316602

Oftentimes, it is difficult to find electrical conductivity and potential of hydrogen measurement sensors with PLC compatible interfaces at a low cost. The reason for this might be due to the fact that the companies producing industrial grade sensors for continuous measurement are extremely scarce and can therefore dictate the market value. Another reason may simply be because it is more expensive for the device manufacturers to make items to order instead of producing them in bulk.

This thesis was conducted for Metropolia Urban Farm Lab, a separate co-learning space for experts, students and companies alike to find solutions for improving the well-being of hu-mans on earth. The main goal of this thesis was to explore cost effective methods for meas-uring, recording and monitoring the electrical conductivity and potential of hydrogen of the watering solution for hop plants.

After conducting research through multiple avenues (both online and in the real world), it was deduced that not only were cost effective EC and pH measurements possible, but could also cost approximately half the price that a majority of companies are currently paying. By following the datasheets and specifications of the different devices (provided by their manu-facturers), simulation models that closely mimic how the devices would act in real life were created and the data they produced was analysed.

MindSphere (an open, cloud-based IoT operating system created by Siemens) was used to record and graph the values detected by the cost effective measurement system. The IoT platform made it significantly easier to monitor the system from afar, since the platform can be accessed (by any authorised personnel) from anywhere in the world.

Future areas of research and the impact of the findings of this project are also given in the conclusion of this thesis.