Basic Income In The Era Of Automation : A potential response to technological unemployment 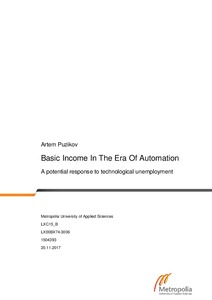 The term ”Basic Income” (BI) describes a multitude of policies, the common characteristics of which are their unconditionality and availability to everyone. Actively discussed and analyzed since the mid-20th century, the topic has gained traction recently in connection with rising automation and expected displacement of human labor, as a possible answer to corresponding social problems. The main question was whether automation could become the main source of funds for BI.

To answer that question, comparison was conducted between human worker and an industrial robot in Vartsila factory on three main activites - nitriding, nitro-carburizing and induction hardening, in a work cycle of 8 hours per day, 1500 work hours per year - to compare productivity and corresponding difference in revenue. Performance was analyzed for three main metrics: time per one piece, total work hours and total number of work pieces.

Under circumstances outlined above, the robot ended up consistently bringing approx. 40% more operating profit for the similar work hour allocation. Applied to overall profits from the segment, it produced an estimated €8m in spare profit just in the segment of General Industry and just for Bodycote.

Overall, given continuous improvement in technology and efficiency financing BI by taxing additional profits is entirely plausible. It should be considered by decision makers as an important measure to tackle many pitfalls of automation.