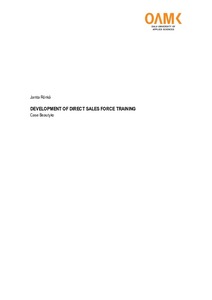 Rönkä, Janita
All rights reserved. This publication is copyrighted. You may download, display and print it for Your own personal use. Commercial use is prohibited.
Näytä kaikki kuvailutiedot
Julkaisun pysyvä osoite on
http://urn.fi/URN:NBN:fi:amk-2020060416842

Thesis was commissioned by Beautyko Import Oy, founded in December 2017 which imports South-Korean cosmetic brands in Finland as well as in 5 European countries. In addition to importing company operates on B2B and B2C sections, in B2C sales happens both through e-commerce and direct selling. Thesis focuses on developing B2C sales regarding direct sales model that company implemented in late 2019. Objective of the study was to find out what kind of support and training do independent sales force need especially in the beginning of their operations as well as how those needs should be met and what company has to take into consideration in order to do that.


Knowledge base for the study was obtained through literature review from relevant secondary sources regarding South-Korean cosmetic markets, sales, direct sales in special focus and sales management. To obtain primary data for the research a questionnaire was conducted in the form of online survey. Survey was targeted to current independent sales force. Qualitative analysis was done to survey data using content analysis and discourse analysis.


Results from the survey indicated that needs for support and training vary depending how long has an individual been working as an independent salesperson. Furthermore, data revealed underlying issue concerning management reactions when faced with negative situation or feedback. Thus, impacting on the willingness to raise issues or give any sort of feedback that could be understood as a critique. Results also indicated varying factors that motivate individuals and how some practices inside the company regarding competition impact on the level of motivation.


Suggested development ideas were to enhance internal communication practises as well as clarifying management roles in a way that sales force would know who to contact and in which matters. Further suggestions were made regarding ways to enhance motivation of sales force by equalizing opportunity to win competitions. Suggested ideas of sales force training were to add variation to the contents to match differing needs of the sales force as well as to utilize potential in learning from peers by an allowing individual to show in which manner they sell in in-home sales event.


Further measures could be to expand the number of respondents, further research internal communication practices and study to possible impacts of implementation and development regarding sales force training.