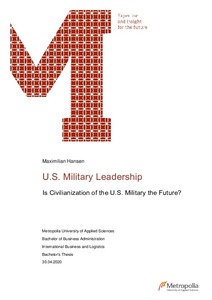 Hansen, Maximilian
All rights reserved. This publication is copyrighted. You may download, display and print it for Your own personal use. Commercial use is prohibited.
Näytä kaikki kuvailutiedot
Julkaisun pysyvä osoite on
https://urn.fi/URN:NBN:fi:amk-2020060416877

The U.S. Military is a large, living organization. It is constantly changing externally, but does it have enough internal change? The U.S. Military has reduced recruitment standards for 17 years in a row. What does this mean? Strict discipline and early mornings have not gone away. How do these new recruits fare, when 20-30 years ago they would have not gotten in, with similar leadership and discipline of the past?

This thesis is a literature review and analysis of the U.S. Military’s own publishings, and publishings of related topics, or of topics directly corelating to factors that may influence the direction U.S. Military leadership will take in the future. The thesis examines various management and leadership theories, comparing the two fields. Following this the thesis analyses various literature regarding the new incentive to recruit a new demographic of video game players. Gamers have a large use for not only the U.S. Military, but for militaries around the world; this use only grows as technology becomes more and more ingrained into the lives of people. The study also looks over literature of a new career field developed in the U.S. military: Cyber. It analyses various sources demonstrating the ever-growing importance for a strong cyber security team for not only the military but also the country.

The study also includes answers to interview questions asked to senior leaders in the U.S. Military.

The research project concludes itself with a prediction of the direction U.S. Military leadership will take in the future.