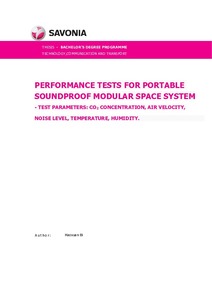 Haoxuan, Bi
All rights reserved. This publication is copyrighted. You may download, display and print it for Your own personal use. Commercial use is prohibited.
Näytä kaikki kuvailutiedot
Julkaisun pysyvä osoite on
http://urn.fi/URN:NBN:fi:amk-2020060416946

The aim of this thesis was to conduct performance tests on a small office called BOX. The specific location of the box was in the hall of Savonia University of Applied Sciences. The experimenters took measurements during the spring break of 2020 and within a few weeks after the end of the spring break, and drew relevant graphs for more direct observation and comparison. The
measured contents mainly included indoor carbon dioxide concentration, humidity, indoor and outdoor temperature and noise level. All the instruments used were provided by the school.

Through discussion and analysis of the experimental results, the experimenters obtained the advantages and disadvantages of the box. Secondly, the author analyzed the applicable population and reasons for this small office, as well as the development direction of the box in Finland and China.

However, there are some suggestions for improvement. By placing green plants in the box, the increase in carbon dioxide concentration can be suppressed. By adding blinds in the box direct sunlight can be
prevented and the privacy of the box can be increased. Also, by adding some decoration or equipment in the box, it will attract more people.