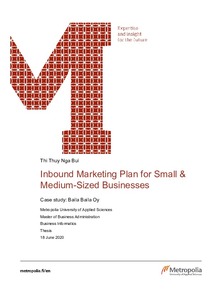 Bui, Thi Thuy Nga
All rights reserved. This publication is copyrighted. You may download, display and print it for Your own personal use. Commercial use is prohibited.
Näytä kaikki kuvailutiedot
Julkaisun pysyvä osoite on
http://urn.fi/URN:NBN:fi:amk-2020060416985

The objective of this study was to develop an inbound marketing plan for the case company Baila Baila Oy. Baila Baila is one of the oldest Latin American dance schools in Finland. The 20 years old school has a good reputation and several loyal customers. Baila Baila actively spreads its brand through marketing strategy, and it hopes to inspire more people to dance. Despite the company’s effort, they cannot generate many new customers. Thus, the company looks for ways to improve its performance.

The existing knowledge section focused on identifying best practice and suggestions for building the proposal, especially in relation to a better understanding of how technologies change consumer’s behavior and marketing strategies.

The outcome of the thesis is the framework built on discoveries from the conceptual framework and current state analysis. The framework was constructed cautiously and included several methods and tactics to ensure the competency framework. It was evaluated by two marketing officers and the founder who can determine whether it is applicable or relevant to the case company in achieving its goals. These findings are also a wake-up call for those who are doing marketing in traditional ways. Also, strategies and tactics were chosen carefully, and good examples were evaluated thoroughly.