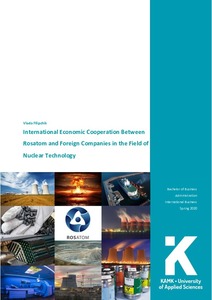 Filipchik, Vlada
All rights reserved. This publication is copyrighted. You may download, display and print it for Your own personal use. Commercial use is prohibited.
Näytä kaikki kuvailutiedot
Julkaisun pysyvä osoite on
http://urn.fi/URN:NBN:fi:amk-2020070319493

This research was aimed at identifying and studying international economic cooperation between the Russian state corporation Rosatom and other countries. In addition, the thesis has an analysis of various types of nuclear technologies that exist in the world.
The study of both the international and the Russian nuclear technology market was conducted by collect-ing information from authoritative sources. Based on the collected data, an analysis of the materials was carried out.
Throughout the study, the consequences of various nuclear disasters were identified that were eliminated or the elimination work is still taking place through the international cooperation of various countries with appropriate skills and knowledge. Moreover, the importance of cooperation between countries in the field of nuclear technologies was revealed, as well as, what impedes the development of these technologies in other countries.
The study revealed that the lack of proper knowledge of nuclear technologies and fear of them prevents some countries from developing this business area. After the tragedy in Fukushima, a few countries abandoned the use of nuclear technology. However, a complete rejection of these technologies is difficult for them, as there is a lack of special knowledge and skills for decommissioning. In addition, this work provides statistics on the age of nuclear reactors in the world, and according to it, more than half of the working reactors will soon require a regular shutdown. One of the areas of business in the market of nuclear tech-nologies and services will receive a fast pace of development of services for the decommissioning of radiation facilities and services for the management of radiation waste and spent nuclear fuel.
During the writing of the thesis it was revealed that one of the reasons that impede the development of international cooperation between the countries in the nuclear technology market is the insufficient legislative framework for regulating and managing the process of approving nuclear power plant projects.