On the number of top sport teams in a town 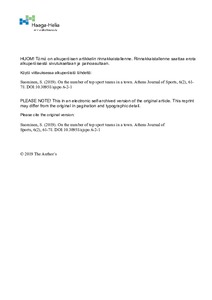 Top teams in sports typically are located in large towns since the junior teams of a top team have a bigger number of talents available and a large proportion of top players come from own junior team. This is especially true in women sport. A large town is able to support a large number of fans and visitors to a game, which results in higher ticket revenue. A large majority on the location of top teams uses male sports and there is no evidence concerning whether female sports follows the same structure. Is it so that if there is a top team of men located in a town, there is also a top women team? Are there any differences across genders in the location? The aim of this study is to include women sport and compare income elasticity of men sport and women sport. The variable to be explained is the cumulative amount of top teams located in a town. Top teams in this setting means that the team is playing in the highest league. Six different sports are included: ice hockey, football, (Finnish style) baseball, floorball, basketball and volleyball. The data covers 28 seasons from 1990 (or 1990/91) to 2017 (or 2017/2018). The Poisson regression and negative binomial regression results show that the cumulative number of male sport teams is positively related to population and negatively to average incomes. The negative income elasticity is weaker in the case of women sports. The coefficient is not significant in negative binomial regression model. Some prescriptive analysis concerning location correlation and autocorrelation is also given.