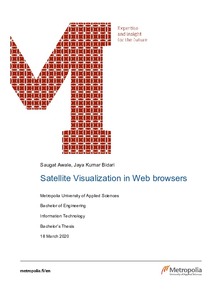 
Awale, Saugat
Bidari, Jaya Kumar
All rights reserved. This publication is copyrighted. You may download, display and print it for Your own personal use. Commercial use is prohibited.
Näytä kaikki kuvailutiedot
Julkaisun pysyvä osoite on
http://urn.fi/URN:NBN:fi:amk-2020081919796

Satellite visualization’ refers to representing the real-time position of the satellite in its orbit with respect to earth’s surface as accurately as possible. Traditionally, the satellite’s graphical representation is executed in single-user desktop applications which make it difficult for multiple users in different workstations to view the same aerospace simulation of a satellite. This study researches the solution to the aforementioned problem.

In this work, a brief theoretical background regarding the physics of satellite propagation is discussed. After the discussion, each column of a TLE is defined. When the geometry of orbit of a satellite is well understood, a web-based application is proposed to visualize the same trajectory of a satellite in multiple workstations. The planning section describes the architecture of the proposed web application. It also lists the tools and technologies used for the project and explains the benefits of each tool. In the analysis part, error of time and coordinates is calculated. The error lies within the margin as defined by the satellite operators.