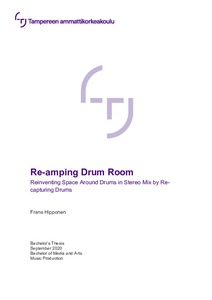 Mix A of the song "Vanha koira"

Mix B of the song "Vanha koira"

Hipponen, Frans
All rights reserved. This publication is copyrighted. You may download, display and print it for Your own personal use. Commercial use is prohibited.
Näytä kaikki kuvailutiedot
Julkaisun pysyvä osoite on
http://urn.fi/URN:NBN:fi:amk-2020091620488

Needs of a band for a recording session can be in contradiction with the environment they are working in. Lively large room could aesthetically give more desirable drum sound for the record at hand, but the band and their engineer/producer may end up working in a small dead sounding environment. The purpose of this study was to compare techniques to overcome this by creating a livelier yet realistic drum room sound in the mix phase while creating illusion as if the drum ambience were recorded along with close-miked drums. The focus was on recapturing drums in a large space through a PA-system.

Four songs from three bands were recorded in various environments with portable recording system. The songs were then mixed with two techniques. First mix had drum reverb done with the re-amping of the drum room. In the given context, “re-amping” meant playing back the recorded close-miked drums in a big live room of a studio, while recording the sound of the room with several microphones. Second mix of each song was done with alternating digital room reverb. Finally, the resulting mixes were evaluated by seven experts in a blind test.

For each song, both techniques produced good quality drum ambience, while some equipment produced more artificial sounding results than others. This study shows that recapturing drums through a PA can be usable method for recreating drum room sounds, although it takes more resources than more common mixing methods of modern era. When time and money is an issue, algorithmic and convolution based digital reverbs can be feasible problem solvers when used correctly.