Introduction to Industry 4.0 and Data Visualization in Embedded IoT System 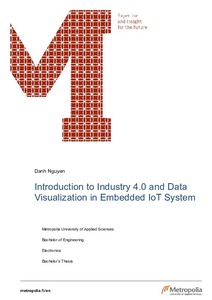 Nguyen, Cao Danh
All rights reserved. This publication is copyrighted. You may download, display and print it for Your own personal use. Commercial use is prohibited.
Näytä kaikki kuvailutiedot
Julkaisun pysyvä osoite on
http://urn.fi/URN:NBN:fi:amk-2020100420946

The project goal concerns designing an IoT system for Industrial Management and Smart Home Application, which acquires various sensors’ data, such as temperature, humidity, and pressure, visualizes them on the line chart, stores them in MySQL database of the web server domain, and sends email alert based on the control limit.
At first, a local web server was hosted by the ESP32 which displayed the current temperature readings from a DS18B20 sensor, allowed the users to input the upper, lower temperature thresholds, and the particular person’s email which is responsible to ensure that the temperature is in the normal range. If the current temperature went to the dangerous field, an email would be sent. Moreover, the user can turn off the email function by checking the radio button on the web server.
Secondly, the above design is enhanced to run on the user’s specific web server domain provided by a free web hosting service to have some more useful and efficient functions. Particularly, one extra sensor module was added to this project - the BME280 sensor kit which gains the humidity, temperature, and pressure data. Then, this system will send an email whenever the temperature, humidity, and pressure exceeds the control limit. Subsequently, the data from the sensors will be stored to the SQL database of the server and visualized in line chart and table forms in the web browsers which can be seen on all devices connected to the Internet from anywhere in the world. These two websites for this design are attached to the appendix 2 of this report.
In conclusion, based on the theoretical knowledge of the IoT Industry requirement, sensor module, this web server project is developed for a better understanding of the Industry 4.0 and IoT data visualization as a result of an embedded IoT system operating on a web server domain.