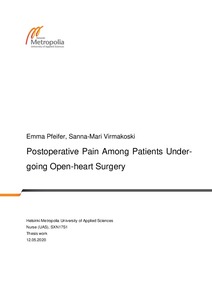 
Pfeifer, Emma
Virmakoski, Sanna-Mari
All rights reserved. This publication is copyrighted. You may download, display and print it for Your own personal use. Commercial use is prohibited.
Näytä kaikki kuvailutiedot
Julkaisun pysyvä osoite on
http://urn.fi/URN:NBN:fi:amk-2020100821140

The purpose of this thesis was to describe the pain intensity and the type of pain experienced by patients who have undergone an open-heart surgery. This knowledge could be used when assessing and treating pain.

This thesis is a part of a multinational study, which aims to describe the factors behind chronification of acute pain. Patients participating in the study were interviewed for this thesis. Background about pain, pain management and assessment as well as open-heart surgery was searched from different databases. Previous research was used to explain the results of this thesis. In addition, the results of this thesis were compared to previous research as well as to common knowledge of postoperative pain and its management.

All the participants were over the age of 18, spoke fluent Finnish and underwent an elective open-heart surgery. The interviews took place on the first and third postoperative days.

In general, the participants were more in pain on the first postoperative day. The pain mostly prevented the participants from moving in the bed, taking a deep breath or sleeping. The least affect the pain had on participating in physiotherapy. Most of the respondents described the pain resembling an electric shock or prickling sensation.