What’s to hide and why? Data sharing as responsible research ethics 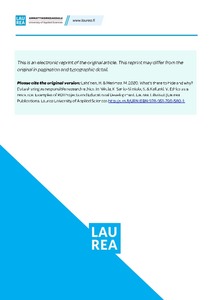 Open science has arguably been the buzzword of science policies of the early 21st century. At first, it was understood mainly as an attempt to convert the logic of scientific results, that is publishing so that articles locked behind paywalls are accessible to everyone. Although open access publishing is not yet an accomplished goal, significant advances have been made. The open science movement has spread, and the demand for openness has broadened to comprise the entire research process, including sharing, opening, archiving and reuse of data, and during the 2010s, data sharing has become an established practice. In this article, we will discuss ethical questions in regard to research data. We introduce the Responsible Research and Innovation (RRI) framework and explore research, development and innovation (RDI) practices and competence at Laurea within this framework.