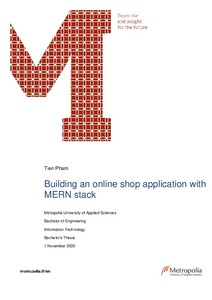 Pham, Tien
All rights reserved. This publication is copyrighted. You may download, display and print it for Your own personal use. Commercial use is prohibited.
Näytä kaikki kuvailutiedot
Julkaisun pysyvä osoite on
https://urn.fi/URN:NBN:fi:amk-2020111322856

Over the last few years, web development and web technologies have evolved significantly. The advancements in the space of tools and technologies have enhanced developers’ experience, user experience and other aspects of web applications. The rise in popularity of React and Single Page Applications concept has made the MERN stack (MongoDB, Express, React and Node) a popular tech stack to build web applications.

The thesis's goals were to describe and examine the concepts and functionalities of the MERN stack and implement an online shop application based on the MERN stack. Each technology comprising the MERN stack was explained in detail, along with assistive packages and libraries to build the application, such as Redux and JWT.

In the end, a functional and production-ready online shop application was built and deployed. The assessments and possible improvements of the application were also mentioned. The thesis can be used as a comprehensive tutorial about the MERN stack, which targets beginners and people wanting to learn more about the tech stack.