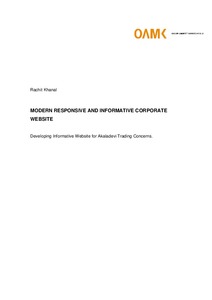 Khanal, Rachit
All rights reserved. This publication is copyrighted. You may download, display and print it for Your own personal use. Commercial use is prohibited.
Näytä kaikki kuvailutiedot
Julkaisun pysyvä osoite on
http://urn.fi/URN:NBN:fi:amk-2020111823192

Akaladevi Trading Concern, ADTC, is a hardware company based in Nepal. It
has many branches and works in different sectors. With the demand of time, and
in the age of Internet, ADTC realise website as a vital part of the business as it
informs about the services to the costumers and also builds the brand. As part of
experimentation ADTC wants to enter in the game with strong informative
website. Responsiveness of the website is a vital part, as the consumer uses the
services with both smart-phones and computers with different screen-sizes.
Initial meetings were set between both parties and project requirements were
discussed. As, part of thesis, user and owner stories were noted in details. Basic
mock-ups and wireframe were made several times before reaching the final
layout. Balsamiq was used for developing mock-ups, Bootstraps was used for
developing responsiveness with the addition of media-queries. A web-design was
prepared using the basic HTML, CSS and Bootstraps. In the second phase, the
code were isolated and divided into components. The project was transformed in
the React. Clean and dynamic code was achieved following the component
architectures and React principles.
An informative and modern looking website was developed as a part of the
project, while keeping the responsiveness of the site intact. The project is further
carried out into hosting phase.