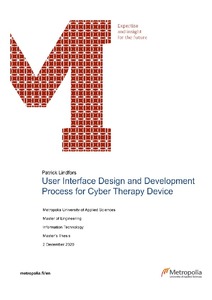 Lindfors, Patrick
All rights reserved. This publication is copyrighted. You may download, display and print it for Your own personal use. Commercial use is prohibited.
Näytä kaikki kuvailutiedot
Julkaisun pysyvä osoite on
https://urn.fi/URN:NBN:fi:amk-2020120325909

Based on projections of the world's population, more efficient healthcare services are needed in the future. Telemedicine has shown potential, but there are a limited number of applications available. That could create business opportunities in near future.
The challenge in telemedicine application is that it is classified as a medical device, which is obligated by legislation for demonstration of being safe to use. It can be considered that a medical device with good usability is safe to use. UI and usability has a strong connection. Hence the design and development of UI is important for telemedicine applications.
To be able to present and demonstrate a design and development process, a cyber therapy device was used as an example and the first design cycle was performed for the UI. Focus in this thesis was to study the legislation of the EU for a medical device UI point of view. Also harmonised ISO standards relevant to medical device UI was studied. In addition to legislation and harmonised standards, health conditions requiring hand rehabilitation and existing hand rehabilitation devices was studied and presented in this thesis.
First design cycle for a UI of a cyber therapy device was performed according to harmonised standards EN ISO 14971:2007 and IEC 62366-1:2015. Hence a design and development process for a UI of a medical device in accordance with regulation (EU) 2017/745 was formed and presented in this thesis. It was found during the study that user research is the most important task to perform during the development of a medical device, since the user has a strong impact on how a medical device is safely being used. Users with different backgrounds have different ways to experience a UI.