Share Buyback and Innovation : A Case Study Analysis of Apple and Alphabet 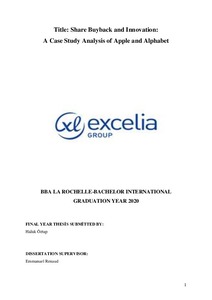 Oztap, Haluk
All rights reserved. This publication is copyrighted. You may download, display and print it for Your own personal use. Commercial use is prohibited.
Näytä kaikki kuvailutiedot
Julkaisun pysyvä osoite on
https://urn.fi/URN:NBN:fi:amk-202101251492

Abstract
Stock buybacks is a controversial topic and continues to attract interest from the academics and practitioners alike. The divergent viewpoint on the impact of buybacks on innovation is a reason that motivated this research. The aim of this research was to analyse the effect of share buyback on innovation at Apple and Alphabet and to establish whether engaging in buyback means there is a trade-off with innovation. The study included a combination of relevant theories (signalling hypothesis, managerial incentive and flexibility hypothesis, Schumpeterian innovation) and empirical analysis using the financial data on Apple and Alphabet from 2010 onwards. Both the companies started their share buyback programs from 2012 and 2013 respectively. Regression and Pearson correlation techniques were employed to assess the existence of a relationship between share buyback and investment in R&D.

The study offers several recommendations. Firstly, consistent with the signalling hypothesis and as seen in case of Apple, management of a business should only engage in share buyback if they are highly confident that the share price is below the intrinsic value. As management tend to understand the business better than the external stakeholders, they are able to better value the business and know when the market is undervaluing the business.

Secondly, share buyback should not be at the expense of giving up R&D spending. As noted through the analysis of Alphabet, a company can engage in buyback while pursuing an increase in R&D spending. This is because although share buyback can help to boost the share price in the short-term, a lack of R&D spending would reduce the long-term competitiveness of the business.

Finally, share buyback can be a preferred option over dividend payout for high growth businesses. This is because share buyback provides flexibility to the management in terms of the extent to which they want to buy back the company’s shares from the open market and whether they want to continue to engage in buyback in the future. The above argument is in contrast to the dividend policy, which is expected to be ongoing once companies commit to paying the dividend, as cancelling the dividend serves as a signal to the investors that the company is possibly experiencing cash flow difficulties.