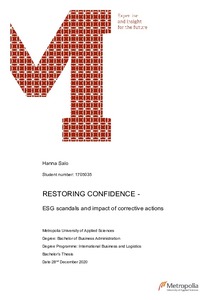 Salo, Hanna
All rights reserved. This publication is copyrighted. You may download, display and print it for Your own personal use. Commercial use is prohibited.
Näytä kaikki kuvailutiedot
Julkaisun pysyvä osoite on
http://urn.fi/URN:NBN:fi:amk-202101301724

Stakeholders of a company are paying more and more attention to ESG, which is a set of criteria describing company’s commitment to ecologically, socially and ethically sound operations. To study the impact of severe ESG failures on shareholder return, the effect of a select number of corporate ESG scandals and corrective actions was studied. The impact of the scandals on the companies’ annual financial performance in the following years was also studied. The selected corporate scandals were VW emission scandal, BP oil rig explosion, Kobe Steel quality data fraud and Nokian Tyres test cheat.

The initial news revealing the scandals were followed by significant fall in share prices. The response of the share prices to the news about corrective actions performed by the companies after the scandals was varied depending on the timing of the corrective action, the cultural environment in which the company operates and the content of the news. The impact of the scandal on company’s annual financial performance was surprisingly modest and the financial metrics recovered already in the year following the scandal.