MARKETING ANALYSIS AND THE OLIGOPOLISTIC MARKET OF CHINA MOBILE 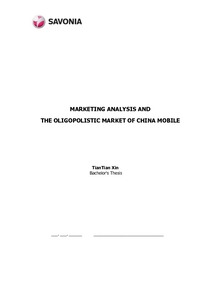 Firstly, the study aims to find the market position of China Mobile Company. Secondly, its purpose is to see peoples' satisfactions of China Mobile's domination. Thirdly, it aims to see the future development of China Mobile and to give some suggestions based on the survey. Currently, China Mobile has the largest customer bases and dominates the Chinese telecommunication market. The new definition (oligopoly) is brought in the thesis to see the oligopolistic market position of China Mobile.
The methodology used in the thesis was quantitative method and it was conducted by questionnaires. A customer satisfaction research was conducted from the people who are mobile phone users. Two ways of collection were used, Internet (emails, chatting programs) and leaflets to the passers. The answers were collected in 5 days from 16th July 2011 to 20th July 2011. 200 questionnaires were released, and all of them were received. 172 of them were valid, the rate was 86%.
According to the marketing analysis, the China Mobile in telecommunication market is oligopoly. After China Mobile took the domination in telecommunication area, it caused both satisfactory and unsatisfactory responses. As a result from the questionnaires, we can conduct that since China Mobile took the oligopolistic condition, there is a lot of dissatisfactions among customers. The opacity fare charge always occurs, and people hope there would be more kinds of pricing packages which were more beneficial for the customers. 3G technology should be developed to be more competitive on getting new customers.