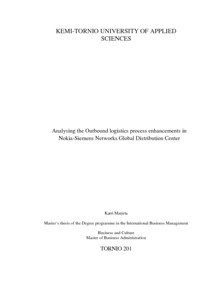 Based on the analysis the poor performance was mainly originated by the tight schedule of the integration projects. Several performance improvement projects were established to get the performance back on the desired level. The finding of this Thesis is that those short-term projects were considered to be successful as the set goals were met on time. In addition, the ExpoSe project can be considered successful as the GDC outbound process was enhanced. Further study is needed to establish whether the same process can be copied to other HWS distribution centers.