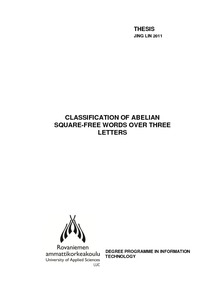 The programs and their input files were uploaded to computers, Hippu and
Louhi, on the IT centre for science (CSC) by using the Nutty SSH client
program which supports the means for security communication. Two
programs were successfully run on Hippu which is meant for running
interactive jobs and background jobs. Another two programs failed to run on
Louhi which is meant for running parallel jobs and batch jobs.

Many versions of both the programs were tested on Hippu. Around a million
of the abelian square-free words of the different lengths over three letters
were constructed on Hippu during the thesis project. The programs which are
attached in the appendices were not developed as fast as expected.

The most difficult problem was to build a parallel program in Python and to
find the way for it to run on Louhi. Many tests were done on Louhi, but all of
them failed. For future research, the programs’ running speed could be
improved significantly, if a solution to these problems can be found.