Is cultural taste in Finland acquired from mother, father or both 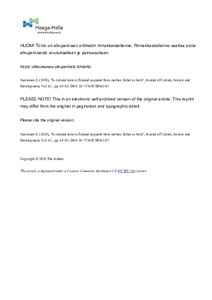 The main goal of this paper is to address the importance of parental cultural taste in explaining cultural participation among older adults in Finland. The study considers the intergenerational transfer hypothesis and asks: Do middle-aged or older consumers inherit cultural tastes from their parents? How stable are these intergenerational transfer effects? Which parental hobbies are the most influential? A constant elasticity of substitution (CES) utility function is used to describe the structure of consumer preferences. The linear demand system to be estimated uses the seemingly unrelated systems (SUR) method with two equations. If the intergenerational transfer hypothesis is valid, parental interest in movies, pop music, classical music and visual arts should have a positive impact on their children’s demand for movies, rock or jazz music, classical music and art gallery visits, respectively. The results indicate that the intergenerational transfer hypothesis is valid. Children do indeed inherit their cultural habits and taste from their parents. We seem to visit similar cultural events to those that our parents do or did. The youngest age cohort is by far the most influenced by parental interest in classical music. The visual arts and pop music interests of parents seem to be second and third most influential hobbies but only when the youngest age cohorts are considered. Parental pop music and sport hobbies are the most influential sources when the cultural and sports participation of the middle-aged are studied. A mother’s visual arts interests and father’s sports interests are most important determinants of the cultural and sports participation decisions of the oldest age cohort. In general age, gender and education are important determinants of cultural participation. The youngest, who have less family constraints, are more active than the middle-aged and those over 55 are more active participants – except for filmgoing or rock music. Theatre attendance, arts gallery visits and classical music concert visits increase after age 45. Attending musicals is not dependent on education while all other cultural events are elite in terms of education, except rock music concerts, which well-educated parents, attend less than the reference group, which is students. Women are more active in all cultural activities studied here. Most of the intergenerational transfer effects are not stable throughout the child’s age. Only a mother’s classical music or visual art habits seem to have a stable and positive effect on the classical music concert participation and on the art gallery visits of the child regardless of age. However, a father’s corresponding classical music or visual art habits have a positive effect on their children, when they are aged between 15 and 35, attending classical music concerts and going to art galleries.