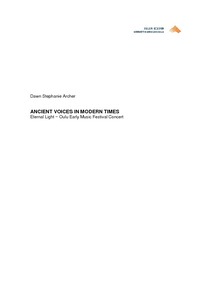 In July 2011 my trio was invited to perform an early music concert for the Oulu Early Music Festival 2012. Due to my personal interest in the history and the music of the Middle Ages, we decided to program a concert of Medieval, Renaissance and early Baroque music. This thesis is a combination of the written work and the concert. The written part focuses on medieval style improvisations performed and medieval style instruments used in the concert. The goals were: 1) to become more historically informed about medieval instruments and music with a special emphasis on improvisation, 2) to apply the information gained through research and to perform a convincing concert including my own improvisations, 3) to share the knowledge gained and inspire others to try their own versions. The concert was performed in Oulunsalo Church on Tuesday 31st January 2012. The methods used for completing this thesis included: reading, studying, rehearsing, recording, listening, analyzing, performing and writing.

The results are highly favourable. I received positive comments from the festival organizers and gained an increased confidence to improvise. I developed a greater awareness of medieval music. As a recorder player working with fixed-pitch instruments, I am now more sensitive to tuning the unusual sized intervals of Pythagorean tuning.