How to convert from Microsoft Visual FoxPro to PostGreSQL 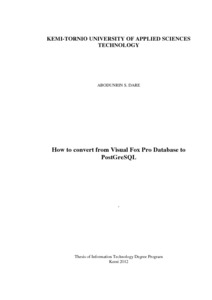 The fundamental idea behind computing is about processing and storing information which in an explicitly defined term is known as data manipulation. For several reasons, business to domestic, data transfer seem about the most important aspect of information processing such that a slight mistake in its handling could lead to a catastrophe for the intended user.

As the title depicts, conversion of data from a source to its destination database, this report carefully analyze both containers holding and receiving data and extends further to explain the procedures taken to ensure that the conversion is achieved by introducing a third database application which act as an intermediary to first accept content from the source then transfer it to the destination. Putting into consideration the complexity of this research work, clear explanations of all confusing concepts are given such as an introduction to all containers used, what a database is and how data migration is performed i.e. define and analyze source structure (data structure in the old system), define and analyze target structure (data structure in the new system), perform field mapping (mapping between the source and target), define the migration process (automated vs. manual).

To certify the correctness of information given in this report and its result, an adequate time was taken to discuss series of issues on each chapter presented with personnel’s of greater understanding with which clarity was also given on logical concepts such as data structure, mapping and storage format. It would be observed at some latter instance the use of Linux commands during the transfer of data from the intermediary to the final destination, this was adequately reviewed by the supervisor who tested the outcome and also noted the preventive measures that should be considered to avoid data loss.

This thesis report serves as a descriptive guide to user(s) who might intend to work on a similar project or just to equip their knowledge of data conversion of any type. From the source to destination, all processes have been extensively highlighted and proper credit was given at the end to acknowledge writers of the books used and references to the internet resources.