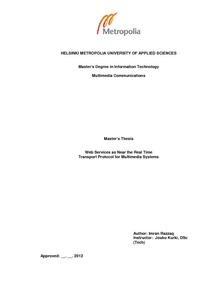 Web Services in general offer a complete package of functioning services via a loosely oupled distributed communication model for the client applications to access their functions. The architecture of Web Services is mainly based on Internet standards, e.g. TCP/IP, HTTP, SOAP and XML.

Real time data requires that its accuracy and validity is tightly or loosely coupled with a time frame, which means that the data becomes unused or invalid if not available within a desired time period. If the time period is not very short and strictly followed it is called Near the Real Time Data. Generally web services are used for the Non Real Time data but here the web service platform was experimented to carry Near the Real Time Data by working as a transport layer for Real time Transport Protocols, i.e. RTP, and evaluated in terms of technical feasibility, communication overheads and communication delays.

An experimental system that carries voice data over the Internet was implemented by using the communication model presented. A G.729 voice codec was used to make 128 kb/s coded voice from a sound device of a Windows computer. The voice data was carried over an IP-network using a Web Services based architecture. The SOAP-protocol was used as the transport protocol for Real Time Protocol (RTP) carrying the voice data. The communication overhead was evaluated to be reasonable in a typical network scenario depending upon the network type and the voice data parameters, i.e. bit rate and frame rate. In today’s network conditions communication overhead is acceptable and the proposed architecture of using a Web Services based architecture provides a unified and easy to deploy system for transmission of business critical data in a wide variety of networks.