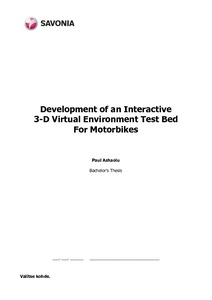 The Virtual world and environment technology is rapidly being deployed for effective visual representation of simulations which enables users to interact and explore the environment and even conduct tests. The technology has also effectively provided safe ways to review and modify designs, and even train users on the use of different systems. This final project was commissioned by the Electrical and Information Technology Research Unit of Savonia University of Applied Sciences and Lekasteel Oy, Finland. The aim of this thesis was to develop a three-dimensional virtual environment simulation test bed for motorbikes.

The prototype of this simulation system was built by equipping a motorbike with sensors and interfacing it to an Arduino based embedded systems which implements the rider’s equivalent navigation and manipulation in a virtual environment. Unity3D was used as the development platform to create the virtual environment, and scripting was done in C# and JavaScript. Various tests were carried out on the system at Savonia’s Electrical and Information Technology research facility and useful information about simulation systems was gathered as a result of the study.

The prototype system was presented at the Helsinki motorbike exhibition which took place at the Helsinki Messukeskus from 2 to 5 February, 2012. Plans are under way to improve on the design and develop the system further to provide support for two or more riders.