Towards Satisfied Users : Study of User Satisfaction on Intranet of Kemi City 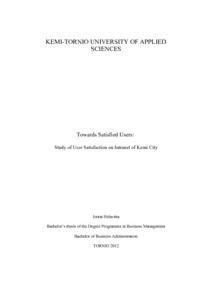 The method used in this study is a questionnaire arranged online for the users of the Intranet. Theoretical part is divided to two chapters, first one studying users and user based design theories and the second part studying intranets and their technology from both general point of view and the point of view of Kemi City. The empirical research was arranged online during autumn 2009. The questionnaire received 140 replies out of approximately 450 reached employees and the conclusions of the study are based on the questionnaire results.

The questionnaire results show that there are both positive and negative experiences with the Intranet. Many employees who felt the service to have negative aspects to it, often expressed their exact problems in the open-ended questions. The information collected with the questionnaire is helpful in terms of knowing the exact problems the users have with the service as well as updating the Intranet to be user friendlier.