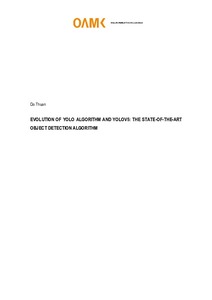 Thuan, Do
All rights reserved. This publication is copyrighted. You may download, display and print it for Your own personal use. Commercial use is prohibited.
Näytä kaikki kuvailutiedot
Julkaisun pysyvä osoite on
https://urn.fi/URN:NBN:fi:amk-202103042892

Object detection is one of the primary tasks in computer vision which consists of determining the location on the image where certain objects are present, as well as classifying those objects. In 2015, the YOLO (You Only Look Once) algorithm was born with a new approach, reframing object detection as a regression problem and performing in a single neural network. That made the object detection field explode and obtained much more remarkable achievements than just a decade ago. So far, combining with many of the most innovative ideas coming out of the computer vision research community, YOLO has been upgraded to five versions and assessed as one of the outstanding object detection algorithms. The 5th generation of YOLO, YOLOv5, is the latest version not developed by the original author of YOLO. However, the performance of the YOLOv5 is higher than the YOLOv4 in terms of both accuracy and speed.
This thesis investigates the most advanced inventions in the field of computer vision which were integrated into YOLOv5 as well as the previous versions. Using the Colab platform to implement object detection in the Global Wheat dataset contains 3432 wheat images. Subsequently, the YOLOv5 model will be evaluated and configured for improvement based on the results.