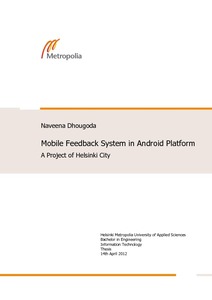 This project was carried out for the Public Works Department of Helsinki City, and the purpose was to create a location-aware feedback application for the Android mobile platform. The created application was capable of interacting with a remote server and rendering the user interface at runtime depending upon data retrieved from the database. In addition, a web application was also required to be created to handle the database.

The mobile application was developed in the Android platform using the Java programming language in Eclipse IDE. MYSQL was used for database design and PHP was used as a server side scripting language. The web application consisted of simple HTML pages with CSS and Javascript.

During the project, a localized Android application, capable of accessing device features such as camera and GPS and creating the user interface dynamically, was developed. The web application was also created, and it acted as an interface for creating, viewing and modifying the data in the database.

The developed Android application can be used effectively to get feedback from general citizens in workshops organized by the Public Works Department of Helsinki City in the form of general text, images and location information. As the application is localized, it is accessible to people using the Finnish, Swedish and English language.