Sierra Leone After the War : Reconstruction, Aid and Corruption 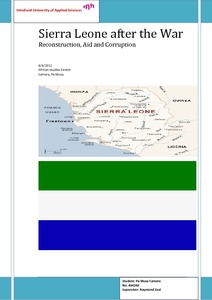 Investors have stayed away from the African continent for a very long time and rightfully so. The continent is fraught with civil unrest from Somalia to Sudan, from Libya to Democratic Republic of Congo. Most of the countries that are experiencing civil unrests are resource-rich nations. This gives credence to the concept of ‘resource curse’ for resource-rich nations. Sierra Leone is no exception, having suffered an eleven-year long civil war, from 1991 to 2002, causing major setbacks for the country, from loss of lives to a disrupted economic system. However, with the speed of economic growth around the world, Africa has become an important entity with its vast natural resource deposits. The world needs Africa to fuel its economic growth, which has seen the influence and presence of China, with the fastest growing economy, see significant growth on the continent.
Sierra Leone now enjoys some stability and its economy steadily growing. With the recent discovery of two oil wells off the coasts of Freetown is bound to see more FDI coming the country’s way. The country also has embarked on reopening some of its mines that were closed because of the civil war. The country is expected to start negotiating for mining and exploration contracts.
For the past 50 years, China has been working hard to strategically position itself in Africa and developed important bilateral relationships to maintain a strong foothold on the continent. China has become Africa’s leading single donor, on a continent that largely depends on aid; this is a major advantage for the Asian giant.
Western and Chinese aid are both aimed at the same goal, the UN’s Millennium Development Goals (MDG). However, there are significant differences in their policies and implementations. The difference can be found in their conditions and/or what they are tied to (place or company to spend it with).